Book 1 of the new INFIDELITY series is coming on October 13th...
Are you ready for BETRAYAL? 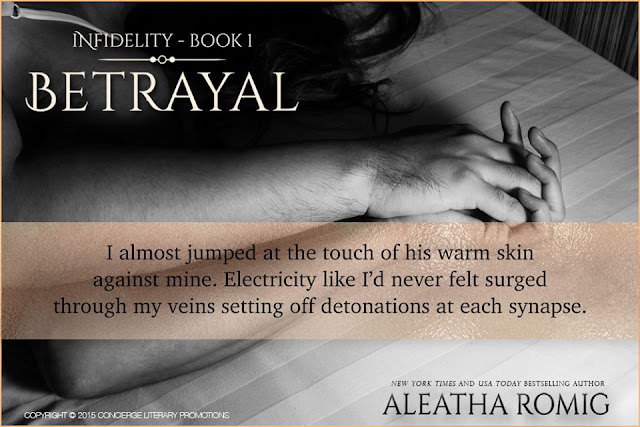 The following is copyright protected by Aleatha Romig. Do not copy or reproduce. If you want to share, please send your friends to this blogspot. Thank you for respecting the hard work and rights of this author.

The giant oak trees parted, giving way to the flood of sunlight. If it weren't for my sunglasses and the tinted windows, the saturation would be blinding. The effect was undoubtedly the intention of the designers and architects when they mapped out the plantation centuries ago. The shadowed lane—quiet, secluded, and draped in Spanish moss—was a prelude to the crescendo of Georgia blue sky spotlighting the splendor of the manor. Each inch up the cobblestone drive tightened the muscles in my neck and back, reminding me of the appropriate posture for a Montague.
No matter how many times I told myself that I was no longer the child trapped within the iron gates or that I was a competent woman who’d recently graduated summa cum laude, the little girl’s voice inside of me repeated the mantra I've known since the beginning of time: some things never change. The closer we got to the giant house, the more I tensed, my years of separation slipping away as my confidence threatened to dissolve.
The original structure had burnt in the late 1800’s. According to family lore, though it was considered stately in its heyday, by current standards the original home would barely suffice for a guesthouse. The current Montague Manor was now one of the most admired mansions in the Deep South. Where others saw beauty, I saw a prison and loss of innocence.
Willing my jaw to unclench, I reminded myself again that this was only a visit—temporary at that. It had been almost four years since I’d graced Montague Manor with my presence, and if it hadn’t been for my mother’s invitation—correction, summons—I wouldn’t be here now.
“Miss Collins?”
Lost in my own thoughts and memories, I’d missed the stopping of the car and the opening of the door. Turning toward the sound of my name, I saw, framed in sunlight with his hand extended, my stepfather’s driver, Brantley Peterson. The older gentleman had worked for my family for as long as I could remember. Though I barely recalled a time before my mother married Alton, I knew from stories that Brantley had been here then too. He’d worked for my father just as his father had worked for my grandfather, Charles Montague II.
“Miss Alexandria?” he said. “Your parents are waiting.”
Taking a deep breath, I moved my legs outside the car, purposely avoiding his offer of help. “Just Alex, Brantley.”
“Not forever, miss. In no time you’ll have ‘counselor’ in front of your name.” A hint of a smile emerged. The rarely visible emotion threatened to crack the façade of his aloof veneer as his cheeks rose and the deep-set wrinkles brought on by age multiplied near his gray eyes. “Your mother is very proud. She tells everyone how you were accepted to both Yale and Columbia to study law.”
Rubbing my moist palms against my jeans, I looked up—and up—at the pristine walls, spotless windows, and large stately porches. In another place, another time, I would have thanked Brantley for his compliment. I may have even confessed that I was also proud of my accomplishments, but more than that, I would admit to being pleased to hear that my mother still spoke about me, acknowledged that I was her daughter.
The relentless Georgia sun upon my skin and humid air within my lungs confirmed that this wasn’t another place or time. The years of Montague training suppressed any advancement I’d since made in becoming Alex Collins, a real individual with thoughts, feelings, and dreams. In merely the time it took to pick me up at the Savannah airport and drive me into the past, I was once again, Miss Alexandria Charles Montague Collins, the flawless proper lady, pretentious to the help, and people pleaser—the well-bred Southern belle who wore the mask of perfection because no one wanted to see the truth underneath.
It didn’t matter that this was the twenty-first century—not to the bluebloods. This was and would always be the world where appearances were essential. The secrets that darkened the corridors and doorways were forever left unspoken.
The movement of the curtain on the second floor caught my eye. It was so fast that I could have easily missed it. I may have, were it not for the interior location of the window: it was my old bedroom—a place I loathed more than any other.
With his stoic poise returned, Brantley asked, “Shall I take your bags to your room?”
I swallowed. “Not yet. I haven’t decided if I’m staying.”
“But, miss, your mother—”
I lifted my hand dismissively—something I would never have done in California. “Brantley, I’ll let you know my plans once I know them. In the meantime, keep the car in the drive and leave my bags in the trunk.”
Nodding, he murmured, “Yes, miss. I'll be here.”
He always was.
Did that make him part of the problem or solution?
Biting the inside of my cheek, I gracefully made my way up the cement path.


Why did I come back?


Welcome to the world of Infidelity...be prepared to ONE-CLICK on October 13 EVERYWHERE.

Exclusive pre-sales and sample available on: iBooks
Posted by Aleatha Romig at 7:28 AM