Begin this journey with RUTHLESS REIGN:

I have a secret. I’m not who you think.

In this world, where gowns, castles, and crowns make for the perfect reflections, life isn’t always as it appears. Love is elusive, even when the most beautiful woman is right before you. Illusions distort visions, shadows lurk in the sunshine, and monsters tread behind smiles and chivalrous facades.

I, Roman Archibald Godfrey, swore an oath to Molave.

And above all, to Princess Lucille.

The princess isn't mine to take. You know what they say about forbidden fruit.

From New York Times bestselling author Aleatha Romig comes a brand-new contemporary romantic-suspense series, Royal Reflections, set in the world of the royal elite, where things are not as they appear.

*RUTHLESS REIGN is book one of the Royal Reflections series.

“He who does not trust enough, will not be trusted.” ~ Lao Tzu

The halls of Molave Palace and Annabella Castle have secrets that are meant to stay buried. As the reflective veil is ripped away, Princess Lucille is forced to accept the deception surrounding all that she once believed to be true.

To stay resilient in their reign, Princess Lucille and Prince Roman must decide who is trustworthy and who is ruthless, who is friend and who is foe. Even the complicity of family is questioned as the prince and princess fight for their own survival.

Can they even trust one another?

Posted by Aleatha Romig at 9:57 AM No comments:

Are you ready for book two of Aleatha Romig's forbidden royal romance series? 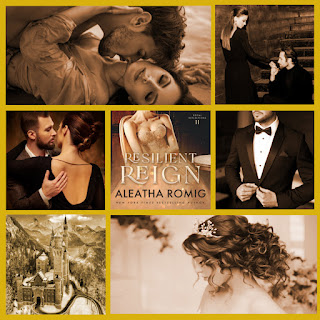 Posted by Aleatha Romig at 11:30 AM No comments:

ROYAL REFLECTIONS HAS A NEW LOOK 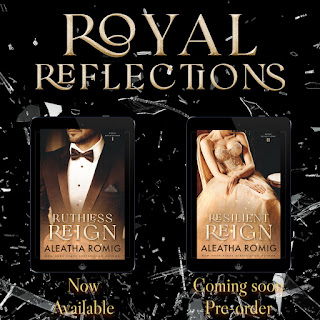 ROYAL REFLECTIONS is here... here's what some readers are saying:
"Ruthless Reign has shown me that Aleatha has a brilliant mind and the talent for keeping me on my toes. I love this side of her! If you don't already have this book? GET IT! I loved every minute of it!" ~ 5-star Amazon review
"At first I wasn’t sure about this book or plot line, but once I started I was hooked!" -~  5 -star Amazon review
"Ruthless Reign is book one in the Royal Reflections series. This is Aleatha’s first royalty series and she knocks it out of the park. It starts out interesting, then you get the slow burn, to yes!, to finally the mystery begins."  ~ 5-star Amazon review
Download book one, RUTHLESS REIGN today:
Amazon
Apple
Nook
Kobo
Google Play
International
Audio
Paperback
Pre-order book two, RESILIENT REIGN today:
Amazon
Apple
Nook
International
Audio
Paperback
Posted by Aleatha Romig at 11:57 AM No comments:

THE WAIT IS OVER! TIME TO JOIN THE ROYAL FAMILY IN MOLAVE! 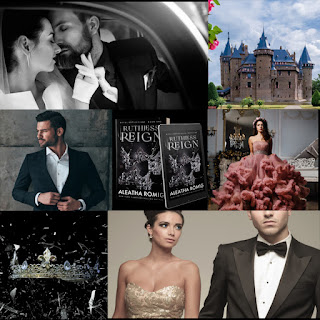 WHAT EARLY REVIEWERS ARE SAYING:
“This Royal Series is something different for Aleatha to tackle but she nailed it! With her awesome writing skills, I was ensnared from the first paragraph right up to where I was hanging off the cliff's edge!”
Janet, Goodreads Reviewer
“This is one of those books that will hook you from the very first page. The intrigue and suspense of the story will have you glued to every word. This author has a way of wielding a pen into a story that you will think you are there and part of the plot. Guessing what will happen next is not an option because you will be guessing wrong. Aleatha Romig will have you so engrossed in the story that you will not know it is over until the last word.”
@Starchaser8808
“Holy what just happened?!? This book is full of suspense and twists and turns and I will be chomping at the bit waiting for Book 2. I can’t say much without getting into spoilers, but if you are looking for a Royals type book that definitely brings the suspense and intrigue, pick up this one. It is absolutely worth the read.”
Kaylynn, Goodreads Reviewer

RUTHLESS REIGN IN ONE WEEK!

ALEATHA'S FIRST-EVER ROYAL SERIES will be live in ONLY 1 week - filled with electric chemistry, intrigue, secrets, deceptions, and STEAM

“No one writes dark, addicting romance quite like Aleatha Romig! Ruthless Reign is an incredible start to her brand-new series! Impeccable writing, explosive chemistry, clever twists, and a hero who will be your next book boyfriend, you’re going to have the best hangover after devouring this! 5 addicting stars!” ~ -Jenika Snow, USA Today bestselling author
You won't want to miss a minute of this new series, so unlike any royal romance you've read! 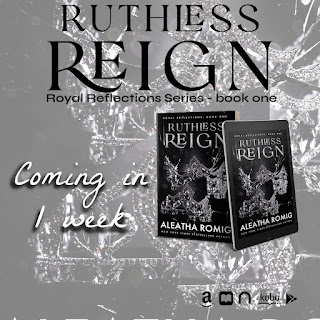 Get your copy today on your favorite retailer.

“YOUR TASK IS NOT TO SEEK LOVE, BUT MERELY TO SEEK AND FIND ALL BARRIERS WITHIN YOURSELF THAT YOU HAVE BUILT AGAINST IT.” ~ RUMI
What happens when the lines are blurred? 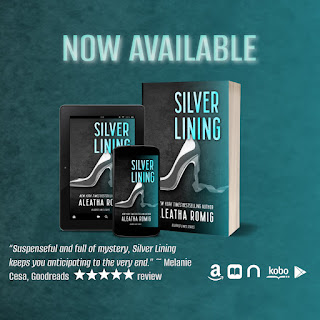 When a wealthy powerful woman's life is threatened, she agrees to one week at a resort. What she doesn't expect is to meet a swoon worthy younger man capable of crumbling the walls around her heart. What happens when real life finds them face to face?
"A twisted, mysterious, romantic, steamy story that will grab you and keep you flipping pages."
From New York Times bestselling author Aleatha Romig comes a brand-new age-gap, forbidden romance, contemporary romantic-suspense novel in the world of high finance, where rules become blurred.
*SILVER LINING is a stand-alone romantic suspense novel.
DOWNLOAD TODAY:
Amazon US:
Amazon Universal:
Apple Books:
Nook Books:
Kobo:
Google Play:
Amazon paperback:
B&N paperback:
Audible:
Add to your TBR/ wish list:
Goodreads:
Bookbub:
#romantic #suspense #romance #fiction #newrelease
Posted by Aleatha Romig at 5:27 AM No comments:

YOU CAN NOW PREORDER SILVER LINING IN EBOOK, PAPERBACK (AMAZON AND B&N), AND AUDIBLE!!!

Here's what one reader said about SILVER LINING:

“This story kept me intrigued from beginning to end. The story line was perfect, filled with mystery, suspense, and hot steamy sex!” ~ Claire Fuentes ⭐⭐⭐⭐⭐ Goodreads Review 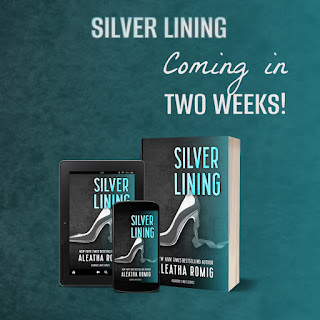 Preorder today on all platforms:

Posted by Aleatha Romig at 8:31 AM No comments: