I'm constantly amazed by my readers

My readers are the best!!! 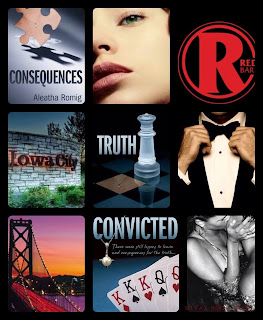 I am constantly amazed by my readers...whether it's a review, which means the world to me, or pictures, or trailers...I'm awed!

It is hard to believe that the imaginary people in my head mean so much to others that they want to create for them and for me! I want each and one of you to know...I LOVE it!!! Thank you!!!

THE CONSEQUENCES SERIES  is now available in one volume!!


The bestselling Consequences Trilogy is now available in a single volume. New York Times and USA Today bestselling author, Aleatha Romig, has taken the world by storm with her acclaimed Consequences Series.  It has been branded “as a genre of its own” with “masterful storytelling that will keep you biting your nails and furiously flipping the pages to finally get to the emotional, jaw-dropping conclusion.”

CONSEQUENCES:  Claire Nichols wakes in an unfamiliar mansion and discovers that she’s at the mercy of billionaire Anthony Rawlings. To the rest of the world he’s charismatic and generous. It doesn’t take Claire long to learn that something more sinister lies beneath his polished facade. As time passes, Claire survives, and her strength penetrates Tony’s veneer, igniting passion where only fear had existed. As the pieces of the puzzle come together, the question becomes clear...Is anything as it appears?

TRUTH:  After enduring Anthony Rawlings’ vendetta, Claire is faced with the consequences of her new freedom.  With the help of old and new friends 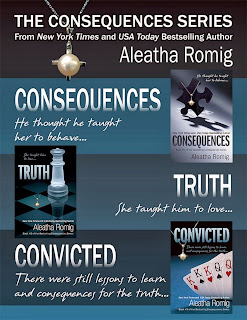 , she strategizes to rebuild her life and learn the truth of the past. Secrets are revealed, true foes are exposed, and Tony admits his true feelings. Claire must decide who she believes—who is telling the TRUTH?

CONVICTED:  Facing her oldest fear, Claire learns the true meaning of isolation. Who can rescue her from this nightmare? Tony? Harry? Phil? Or perhaps a more unlikely savior? Will it happen in time, or will the consequences of the revealed truths be more than she or anyone can handle? As the cards are played, who will win the game?
Posted by Aleatha Romig at 4:56 AM No comments:

Thank you for making my dream come true!

Thank you for making October of 2013 the most amazing month of my life.

OK, that may not be totally accurate...after all, in July of 1965 I was born. That was pretty cool!

May 1986 I graduated college

July 1986 I married my high school sweetheart! (Yeah, that one totally rocked)

July 1989 We welcomed our first child, a boy, into the world! (The bar was set incredibly high)

February 1991 We welcomed our second child, our only daughter, into the world! (As incredible as it was the first time-with the added excitement of watching our son become a big brother made this even better)

August 1996 We welcomed our third child, #2 Son, into the world! (Still an amazing miracle)

There were also job accomplishments, milestones made by our children...Yes, overall, I've been incredibly blessed to have an amazing life.

Last month, I released my third book of the Consequences Series. When  Consequences, my first book, was released, it was done with no fanfare or announcements. **Note to authors** that may be why it sold 563 copies in its first YEAR!

Yes, can you believe that?

Who writes a sequel or creates a trilogy out of something that sells 563 copies in a year?

To be honest, I did it for two reasons: I LOVE my characters and I wanted to know what would happen to them.  (I did it for me)

Then, in November of 2012 I released Truth. This time I told a few people about it, and I was totally excited that it hit #131 on Amazon!

Then the strangest thing happened...people started to read. They started to tell others and blogs jumped on board. Oh, I <3 the bloggers who took a chance on a "different" read and were brave enough to tell others to read!!!

With all of that, when it was time to release Convicted, the final in the trilogy...there was a little bit of a buzz!

OMG! That buzz translated into Convicted making #16 on the New York Times Best seller list (ebooks) and #25 (Combined list), as well as #41 on the USA Today Best seller list, a list where it sat for two weeks!

My advice to everyone and anyone...if you love something...stick to it! If I'd given up my dream to be an author because the first year sales of Consequences was pitiful, we would never have learned the "rest of" Claire and Tony's story. If I listened to every bad review...If I had agreed with the experts that my book broke too many rules...IF I had done any of that...

I couldn't tell you, my awesome readers, THANK YOU, for a release and a month that were truly AMAZING!!!

I couldn't tell you to -- no matter what -- believe in yourself and follow your dreams...you may just love the CONSEQUENCES as much as I do!

Aleatha
Posted by Aleatha Romig at 12:24 PM No comments: