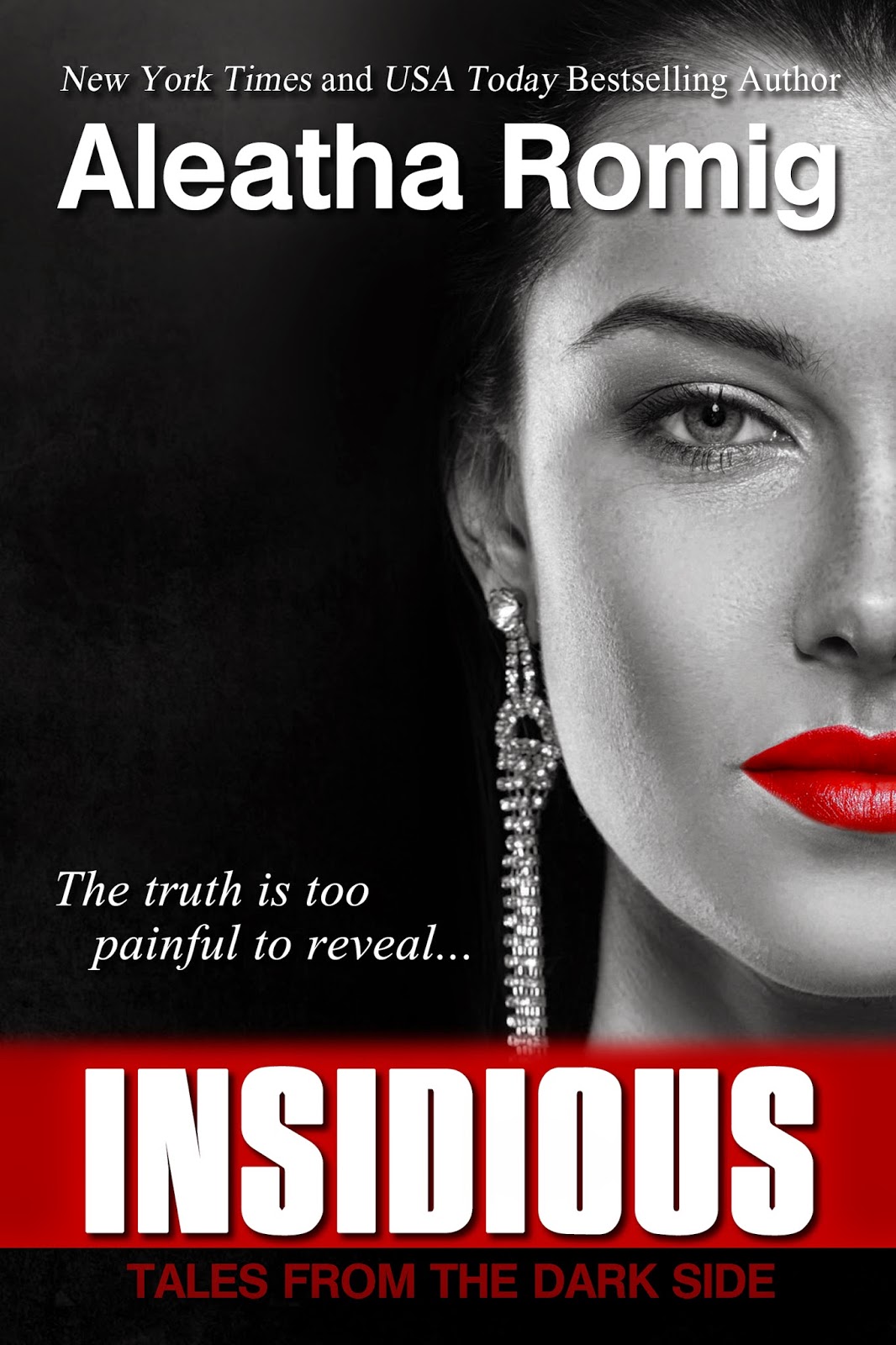 The first excerpt may be found at: http://aleatharomig.blogspot.com/2014/08/first-official-excerpt-of-insidious.html

Second official Excerpt: (This is copyrighted material by Aleatha Romig and cannot be reproduced without her consent

“Thank you, Mrs. Harrington.” The saleswoman’s voice reverberated throughout the pricey boutique.

Nodding in response, I took my purchase and strode toward the door. The five-hundred-dollar shoes weren’t a necessity. Hell, they weren’t even for a purpose: a dinner, a benefit, or any other excuse to show me off and parade me around Stewart’s business associates. They were just because: because they were tall and sleek, with a slender heel and a thick platform. And because they were red. Red, as in the color of emotion: emotion that remained pent-up until its only acceptable outlet was a mundane visible reminder, a way to flaunt the loathing within to the world outside. Oh, I had covertly exercised other modes of release, yet at the moment, a pair of red shoes would suffice.

The gentleman in uniform spoke as he opened the door. “Thank you, Mrs. Harrington. Please come back to see us again.”

“Yes,” I said, my expression unreadable.

“Ma’am, we’re all praying for your husband.”

“Thank you.” I looked down and bit my lip before I returned his gaze, bravely smiling, and added, “I’m afraid that’s our only hope.”

His eyes dulled as he sadly nodded, allowing me to exit through the open door. Rarely did a day go by that someone didn’t offer me his or her support or encouragement for Stewart as he fought his unwinnable battle. I’d practiced my responses well. After all, very little went unseen. While we’d made headlines when we married, mostly surrounding our age difference, we were making them again as the tabloids and magazines discussed my impending widowhood at the young age of twenty-eight.

Moving onto the sun-drenched sidewalk, I covered my eyes with the dark glasses and braced myself for the wave of heat. Up from the depths of hell, like fire fanned by the devil himself, my legs tingled with the contrast in temperature. I bit my lip again, stopping the genuine smile that threatened to shatter my mask of grief. Assuming hell was real, soon it would have another resident. Before the bun of long brown hair secured low on my neck could mold to my skin, I settled into the backseat of the waiting taxi.

Though my car was parked only a few blocks away, I knew the wonders of technology. The GPS would show that I’d spent my afternoon in the Harbor Shoppes—at least until I was ready for it to indicate otherwise.

“To ONE Bal Harbour Resort,” I instructed, as the driver pulled the car into midday traffic.

After spending most of my life in southern Florida, I found little beauty in the city of Miami. What appeal it had was completely lost on me as I scanned the screen of my phone, reading my text messages. A sense of suffocation loomed omnipresent as I read one from my husband:

“WE HAVE A GUEST COMING TO THE WAREHOUSE THIS AFTERNOON. BE THERE AT 4:30. DON’T BE LATE.”
I closed my eyes, hid my expression behind my designer sunglasses, and sighed. Thankfully, due to Stewart Harrington’s recent rapid decline in health, we’d not visited the warehouse in some time: his text was sent months ago. Nevertheless, I refused to delete it. It served as my fuel and my daily reminder: a reminder of a time I refused to forget.

I would not. I could not.

I gave it one more glance, grinning at the shared sense of desperation, before I hit delete. I waited until this morning to respond:

After I’d hit send, his response came back almost immediately:

We both knew that NOW hadn’t been an option, but a minor tweaking of my schedule and a slight juggle of my responsibilities would allow LATER to be a possibility. Smoothing the silk of my sundress over my lap while trying desperately to ignore the sweat-ladened stench of the taxi, I relished the reality: <i>now </i>was almost upon me. If only the car could fly instead of fight the midday traffic.

As Stewart’s time on earth drew nigh its end, I worried about the legalities of our prenuptial agreement. With Stewart’s network of good ‘ole boys, finding an ally, someone to look out for my interests, had been difficult, but thankfully not impossible. Since I’d made my alliance with Brody Phillips, junior partner at Craven and Knowles, there was nothing I wouldn’t do to continue the flow of information. Besides, sex was nothing more than a tool, a weapon. It had been used against me, but I’d learned to use it for my favor. If sex helped me obtain my goal, there was no fuck’n reason not to use it.

Minutes upon minutes later, the cab pulled under the covered drive of the resort, allowing me to exit in the much-appreciated shade. With an assuming smile, I handed the driver cash for the fare and a generous tip. Ignoring the sultry summer humidity, I confidently placed my high-heeled sandals on the steaming pavement, and walked toward the resort. With the efficiency of a drill sergeant, I moved dauntlessly toward my objective. Merely a pretentious nod of my head and the door was opened. A crisp one-hundred-dollar bill at the bellman’s desk and I was armed with the key to a suite on the eighteenth floor. Walking toward the elevator, I shifted my gaze, daring anyone to question my presence. No one did. I’m Mrs. Stewart Harrington.

Within less than a minute, I was ascending the tower toward the eighteenth floor. Although I was confident that Brody had chosen the hotel suite with other goals in mind, that wouldn’t happen today. I’d opened myself up—a little—to him for one reason: it wasn’t sex.

It wasn’t as if I always denied him sex. As a matter of fact, we had an array of locations littered throughout the city where I hadn’t denied him, but honestly, there was something about Brody that made me uncomfortable. Sex was a mechanical act for me, a time to leave my body and zone out. Each time Brody and I were together, that was increasingly difficult. I didn’t want to face that reality or even the internal questions that it raised.

As I disembarked the elevator and peered down the long hallway, the fleeting sense of anticipation took me by surprise. Rarely did I find myself aroused. However, as I realized that it had been almost a month since I’d been alone with Brody, my insides involuntarily tightened.